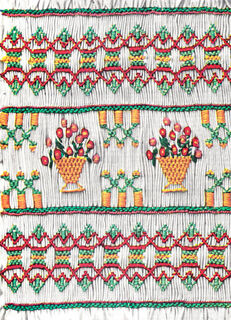 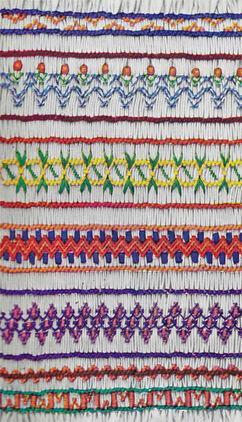 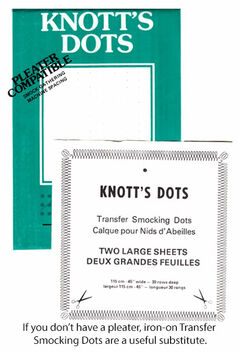 English Smocking is embroidery on pleats that have been pleated before smocking. It is an art form whose origin has been obscured in history but has been handed down from generation to generation much like the sagas; songs and myths, however its roots are traceable to a point through looking at the art of the past and in stitchery. Paintings from the Italian and German Renaissance often depict examples of smocking on men's shirts and ladies chemises. Italian Shirring, which has its roots in the basic running stitch, maybe interpreted as a form of smocking all dressed up.

The origins of smocking are elusive. There are clues but nothing was put to writing until the late 19th century. Until this point, smocking was handed down from generation to generation. Examples of smocking or embroidery on pleated fabric can be found all around the world, tucked away in museums, from indigenous cultures to examples of smocking in paintings and wooden carvings as early as the 12th century. There is also a mention of an embroidered smock in the household accounting of Elizabeth I. The oldest account of smocking dates back to 1175 BC!From the late 17th century to the Industrial Revolution of the late 19th century Smocked Frocks were a very popular piece of clothing for people in rural Britain to wear. The garments were made out of Linen and waterproofed by wiping them down with linseed oil. Big collars added protection from the weather. These smocks were often embroidered with symbols of what trade the wearer did (bakers, farmers, blacksmiths, etc.) and were worn to protect the underclothing.It was the Industrial Revolution

North American Smocking appears to have been either invented or is a form of an old smocking style promoted by Butterick & Co. in the late 19th Century. It was very popular from the 30's through the 60's. This style consisted of iron-on transfers of pairs of dots formed in a pattern that while stitching made up a smocking design and pleats at the same time. This made smocking more accessible to the general public.Another style of smocking evolved from the use of gingham, counterchange smocking, where striped fabric, gingham or dotted fabric, is used, and mark where the stitches are placed. The history of Counterchange in America has roots in pre and post civil war life in the United States.Another style - Lattice Smocking is often seen on smocked pillows. This technique is worked on the backside of the fabric creating the unique and consistent folds on the front. Lattice Smocking is a way to embellish fabric on sleeves and bodice fronts, especially in the heavier fabrics such as velvet and velveteen.

The Smocking pleater was invented by Mrs. Read's husband in South Africa during the late 1940's to assist in his wife's smocking venture. He was a very ingenious man. Since then we've had two other innovators, Lord Stanley (Mr. Read's son-in-law) who invented the first 24 row pleater that worked and Jerry Konistra of Australia who took the 24 row pleater to another level by changing the traditional metal plates and screws that hold the front roller bar ( and needles) in place and adding side pins as well as enlarging the handle bars to accommodate thicker pieces of fabric such as corduroy.In the 1950's Grace Knott, a Canadian, pioneered the smocking movement as it is known today. She promoted the technique known as English Smocking, which differs from the American style, in that you make up the pleats first and then do the embroidery stitches. The effect is basically the same but the look is much different. Around this same time, the smocking pleater, invented in South Africa in the 1950's by Read Company, became readily available to the American and Canadian public through Grace's company - Grace Knott Smocking.The 1980's saw the growth of Smocking Guilds around the world.

Smocking has come a long way since the bold, heavy geometric designs of Grace Knott. Today, geometric designs are delicate and complex, often covered with bullion roses and leaves and other embroidered embellishments like beads and buttons. Smocking has travelled through time and throughout the globe. Evolving with the times and cultures, but always remaining a source of pleasure for many.Here's to your continued enjoyment of smocking. 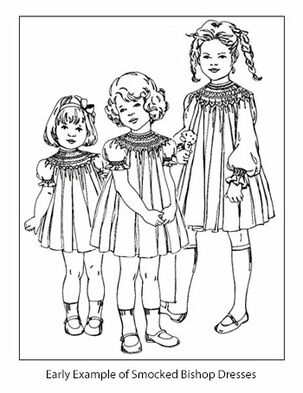 Fast forward to the 20th century

that brought about the demise of the smock frock as a utility garment. The big voluminous smocks were a hazard to the new reaping machines so they quickly became obsolete for everyday wear. They were still worn on Fair Day or to church but the style soon evolved to be a 'fashionable' garment for the female gentry. The new Aesthetic Dress movement took hold and the two styles of the smock evolved into fashionable garments such as bishop blouses & dresses while the smock frock became basic square yoke dresses for young girls. 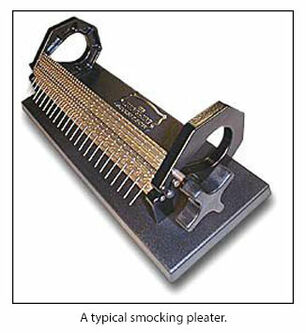 A Brief History of Smocking