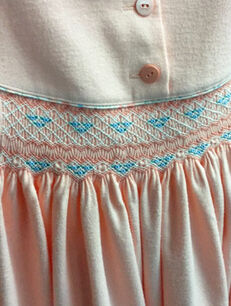 Monthly Meetings:
The McNabb Community Centre 180 Percy Street, Ottawa ON at 7:30 p.m. on the first Thursday of each month from September to June. 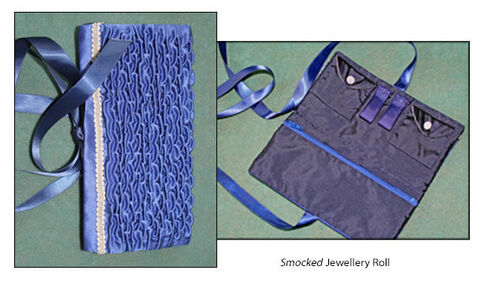 On a trip to Fenelon Falls, Ontario, Margaret Slade, already an avid self taught smocker, met Kathleen Copeland-Nyberg, who introduced Marg to the Smockers' Guild of America (SAGA). An Ottawa chapter was established in 1984, with the vision of extending their love of the art with others.

The following year, Marg met with Giselle Moore, the owner of Giselle's House of Needlecraft and together they set about to gather together a group of enthusiastic smockers, many former students of Marg. A good turn out ensured that the fall of 1985 saw the launching of a monthly program. The members came from varied back grounds. Among the founding executive was Liisa Weekes. Other founding members were Jackie Comerton, Val Rochester, Vicki Steenhorst, Claire Todd and a former pupil of Grace Knott, Helen Venables. 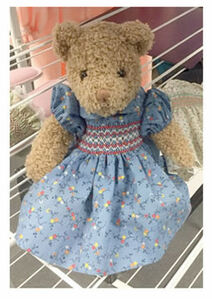 The first meeting of the Capital Smockers was held at Freda's Sewing Centre, with 19 members in attendance. Outgrowing Freda's, the next year Connaught Public School was the meeting place. During the third year, the Ottawa group dropped their affiliation with SAGA, and the Ottawa Smockers' Guild was born in 1987, and the fall of that year saw the McNabb Community Centre become the Guild's meeting place.

The activity program was quite busy during the first 10 years. Among the workshops featured at the monthly meeting were lattice smocking, duplicate stitch, heirloom sewing, battenburg lace, shadow work, picture smocking, counterchange, and holiday candy canes, Trunk shows appeared each fall - from Smocking Unlimited - World of Smocking - and Trudi Clarkson. Special workshops featured an heirloom blouse with smocking, French Hand sewing a sexy nightgown - a more demure pansy nightgown - and silk ribbon embroidery. Service projects varied from smocked bibs and bonnets that were supplied to a number of hospitals - for sale in their boutiques. Knitted booties and bonnets for the neo-natal units, and smocked preemie gowns for the units and for the bereavement packages. The fall of 1989 saw a mammoth undertaking with the decoration of an 18 foot Christmas tree for the Museum of Nature with 275 smocked ornaments. The following year the decorations were donated to 12 charities to be used or sold according to their needs. 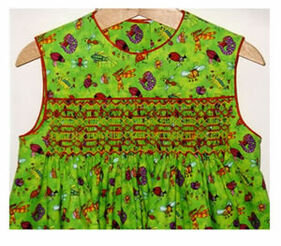 And capturing all this news was the monthly "RAG" along with profiles of the members and their love of smocking, recipes, book reviews and pattern reviews.

Growth continued for the next decade and beyond

Special celebrations continued through 1995, the activity program started with a 3 month picture smocking project and two special workshops - silk embroidery workshop and a contemporary smocking workshop. Celebrants came from far away - Kathleen Copeland-Nyberg came from her new home in the United Kingdom to conduct the anniversary workshops. The following year saw counterchange, smocking on plaid along with embellishment with roses, lazy daisies and french knots. In the 1997 -98 season, the Guild's educators undertook a multi-part project extending throughout the year, with each month featuring a new stitch, and at completion there was a straw hat laying on a bed of flowers surrounded by ribbons, and a beaded trellis. 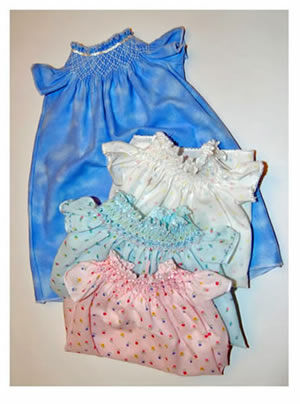 The service project of preemie nighties began in full force in 1996, initiated by Jean Bye. At first the nighties were partially sewn and the smocking and completion was left to the members. Jean in her wisdom noticed that the return rate was slow, and the completion was often a challenge to members. So, future nighties were serged, finished, and ready to smock. Numerous workshops have been held to introduce new stitches, new finishing touches. To its credit, the project has been written about in a number of community newspapers. To date over 1,500 nighties have been completed. Congratulations to all.Over the years, the Guild has been proud to participate in a number of smocking demonstrations throughout the Ottawa Valley promoting the art of smocking. The Guildl's participation in the yearly Almonte Textile Museum Fibrefest demonstration has been a constant over the years.The new millennium saw a significant change in the newsletter. With the start of the new century the style became high tech, with a new logo also designed by our own Kate Goldney and colour photos but it's still full of news. Neil Piche made the newsletter a top quality production through his dedication in

taking the jumble of words, each month, and making them into a magical tapestry of colour and reading enjoyment. Continuing the Guild's determination to stay up-to-date with technology, the newsletter is now distributed electronically to its members while its web site reaches out to the wider community with news about the Guild's activities and the art of smocking.As the years unfold, from its strong foundation, the Guild will continue to innovate and experiment. We invite you to join us in this rewarding activity.

The Ottawa Smockers' Guild began in 1985